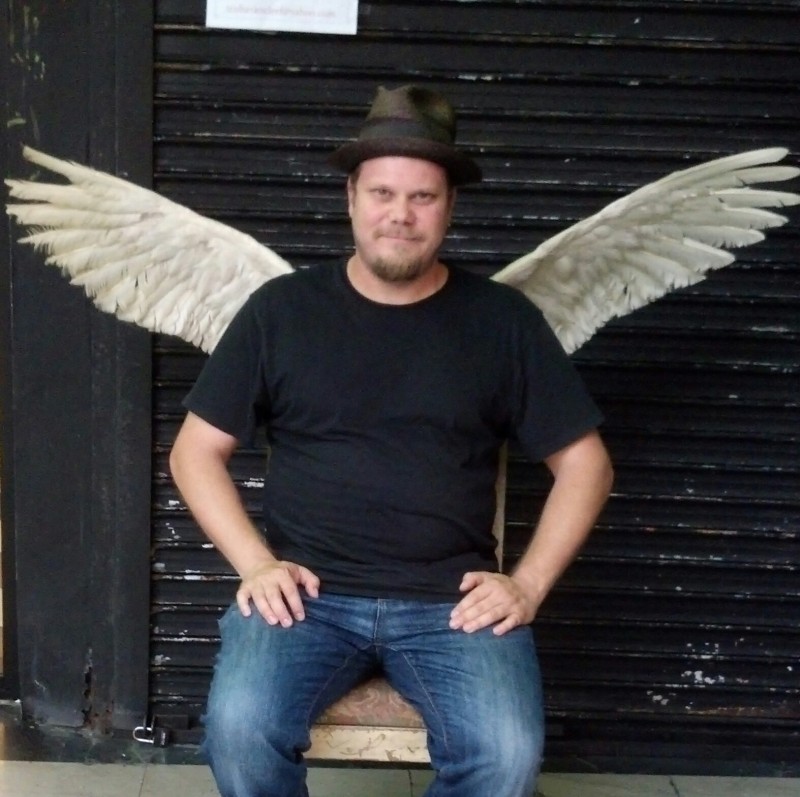 Greg Gould is an L.A. based artist who has been actively selling and exhibiting his artwork since the mid 1990’s. Through his work, he hopes to create an inner dialogue (and at times, a debate) in the public at large.

To date, his works have been included in group shows in Los Angeles, San Francisco, Seattle, and Sydney, Australia, and have been collected in each of those cities on the occasions of those shows. During a period of time from 1999 – 2002, he worked with an internationally exhibiting artist in NYC. At that time, the two of them often traveled through Germany, Switzerland, and France, meeting with curators of various museums and art institutions, mainly on the occasions of the Art Basel and Art Cologne. During these trips, some of their collaborative video works were integrated into the collections of the Staatsgalerie Stuttgart (Germany) and Ludwig Museum, Cologne (Germany). 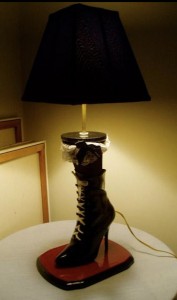 One in a series of lamps carried by MJ Higgins Gallery until their closing.

At the end of 2002, Greg moved back to Los Angeles from NYC, in order to work on various projects and continue his art career. He has maintained a studio space at The Hive Gallery since 2005, where he currently shows new work each month. His works were also handled by The MJ Higgins Gallery in downtown from 2007 until its doors closed. 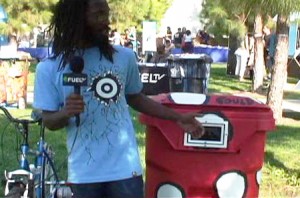 During the past years, his works have evolved beyond ‘two dimensional’ surfaces, and he has started creating sculptural lamps out of mannequin parts, various objects, and discarded furniture in order

to create ‘dimensional paintings’, as well as incorporating video elements into his works.  He has been involved in a number of projects which have been sponsored by such ‘eco friendly’ organizations like ‘Global Inheritance’ and the ‘Eco-Logical Art Gallery / Deja Design’. 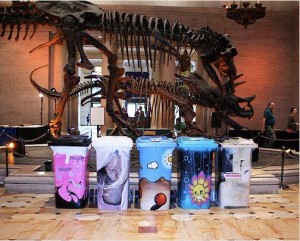 Greg’s ‘art bin’ (center), in ‘Sustainable Sundays’ at The Natural History Museum, Los Angeles (2009), after having been shown at Coachella Music Festival.

For these organizations, Greg has both painted on recycling bins, and on reclaimed / recycled billboard vinyl for shows that have been covered by the L.A. Times, Fuel TV, and others. The ‘art recycling bins’ he painted for ‘Global Inheritance’ have been exhibited publicly at the ‘Hollywood & Highland Center’ (2008), Coachella Music Festival (2009), as well as the Natural History Museum (2009) before being donated to inner city schools in Los Angeles.

In 2010, Greg Gould painted a large scale installation piece that was shown at the Epicenter Music Festival. This installation was a massive 3-Dimensional depiction of a cartoon like room that viewers could interact with. His work has been purchased for TV shows such as ‘New Girl’ (on FOX), and it has appeared on the BBC Show ‘Shock Therapy’. 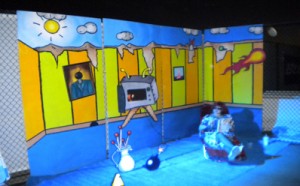